Disclosure: Some of the links in this post are Affiliate Links. That means if you click on a link and purchase an item, we receive an affiliate commission at no cost to you. All opinions remain our own. We are affiliated with Bookshop.org to help support Indie Bookshops. Click here to learn more about our decision!

Part of becoming a young adult is learning how to get your financial shit together.  There becomes a certain point in our twenties (or thirties) that it is no longer cute to ask your parents how to write a check or how to open a bank account.

Unfortunately, it is exceedingly rare to be taught personal finance in high school or college.  Most people seem to learn money management in a cobbled-together fashion from family, friends, and financial advisors.

And then we allow 17 & 18 years to sign up for tens of thousands of dollars in student loans without any real education of what they are committing towards… sigh.

My own journey to financial competence didn’t start until I was 26 years old when I was desperately searching the internet for a solution for my partner’s massive student loans.

I stumbled upon several personal finance blogs, then FIRE (financial independence, retire early) blogs, and THEN the holy grail: personal finance books for young (or young at heart 🙂 ) adults written by the same bloggers that I admire.

These personal finance books help to fill the void that our secondary education and parental units failed to teach. And they managed to do it in a way that keeps you from clawing your eyes out in boredom.

Each of these books listed below has been crucial in my own financial journey and starts at a beginner level of personal finance knowledge.  The books progressively level up into more and more advanced concepts including the new buzzword, FIRE (financial independence, retire early).

Don’t let the thought of advanced concepts intimidate you if you are at the beginning of your journey.  The most crucial aspect of many of these books is helping you to discover your reason “why” to save money and to become financially solvent.

My Reason Why: Become Financially Independent To Never Experience the Terror of Layoffs

“The Simple Path to Wealth” listed below, opened my eyes for the first time at 26 to the concept of financial independence.  Quite simply, it’s the ability to live off of income sources outside of your day job (ie investments, rental income).  It seems like a concept that is only available to the super-rich, but it actually takes less time and money than I initially thought.

Why is this so important???

If you can live off of income outside of your job, it doesn’t matter if you are laid off, fired, the company goes under, or you are asked to do something unethical…. You can leave your job and not worry about how to pay for your living expenses.

As a child that grew up under the constant threat of layoffs on our single-income family, a large safety net is something I desire more than anything.

Once I knew my reason why learning about personal finance became a fascinating journey instead of a slog.  Starting and following a budget, avoiding consumer spending, pay off debts all became something that I WANTED to do instead of being forced to do so.

GET YOUR LIFE TOGETHER: 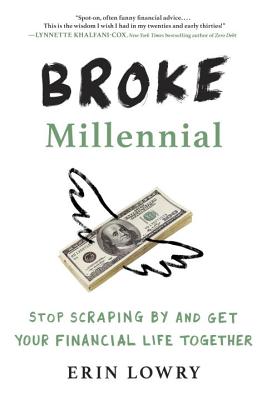 Broke Millennial-Stop Scraping By and Get Your Financial Life Together

If you need to start about the very basics of personal finance, this book is for you.

Written for young adults just starting out of high school or college, this book starts with talking about our mindset around money and the rest of the book can be read in any order depending on the topics you need to focus on.

Someone already in good financial shape or older than 30 probably won’t get as much out of this book. Erin writes in an enjoyable, easy to read manner but uses frequent references to dating apps, social medias concepts that Gen Zers and above may need to google to understand. The Year Of Less

A fantastic memoir that chronicles the author’s journey to becoming happier and reaches her financial goals by cutting out consumer spending for 1 year.

Cait had slowly repaid her $30,000 in consumer debts but was slowly falling back on old habits.  She makes a goal to cut out all spending except for consumables: groceries, gas, and toiletries for one year.   She found that the less she consumed, the happier she felt and the easier it was to hit her financial goals.

Note: this book is a memoir and less of a how-to book on minimalism. Elizabeth and Nate appear to be the typical couple in Boston with two conventional 9-to-5 jobs, but their dream is to become homesteaders in rural Vermont.

They decide to embark on a journey of extreme frugality, saving over 70% of their income, to achieve financial independence and retire early to their homestead.

Their frugality is INSPIRING and if you are constantly wondering how your money disappears by the end of the month, look at their strategies on how to eliminate spending while living a full and fantastic life! I discovered JL Collins blog at a time when I was 26 years old and had just got married, moved across the country, and purchased a townhouse.  We had very large student loan bills ($2000+ a month!), and I felt overwhelmed on a daily basis.

I stumbled on to his website and was so captivated that I read through his stock series blog in one night.  If you have ever had questions such as: why do I need to save money? is there an easy way to invest?, or how do retirement accounts work?

You need to read his stock series blog and his book.

The most important concept that he presents is F**** YOU MONEY.

F*** YOU Money is having enough money saved and invested to be able to leave any type of unsafe living situation, unethical employer, job with poor life balance, or an occupation that you just don’t enjoy. You are not “stuck” because of a lack of funds to make a change. No joke, this concept alone has changed how I view my money and has lead to a complete restructure of how and why I invest my money.

Go read his blog and buy his book, you won’t regret it. The folks that created my favorite personal financial podcast, sat down and dispensed all their wisdom in a fabulous book.  Brad and Jonathan host a podcast called ChooseFI.  Chris writes on CanIRetireYet.com

A little more beginner-friendly start to learning about financial independence, it’s a fantastic companion to both the Podcast and the Blog.  You 100% need to check out all three! After you learn the basics of personal finance and are starting to create your little nest egg, you are ready for the final step: what are you saving your money for?

How can your little nest egg help to create your ideal life?

Tanja, along with her husband, Mark, saved enough money in investments that they were able to stop working at ages 38 and 41 to pursue a life of service, outdoor adventure, and writing at their leisure. She presents several different options for creating a work-optional life including semiretirement, taking work breaks every couple of years, and full-on retirement.

While these options may not be possible for everyone, her books walk through the steps that make a work optional life much more possible than you imagine. Containing more advanced concepts than a beginner personal finance book, Kristy and Bryan chronicle their journey to save enough money to retire early and QUIT their jobs at 31!!!

After starting to understand the basics of personal finance, pick up this book to see what the possibilities of saving and invest money can do.  Retiring early may not be possible for everyone, but this book makes the concept FAR more accessible than at first glance. The Best Fiction & Non-Fiction Books To Inspire Your Vegetable Garden The Best Enemies To Lovers Books Three best friends have a dream of opening an Independent Bookshop. Come join our journey while we navigate the ins and outs of starting a small business and talking about what else… BOOKS!

Disclosure: Some of the links in this post are Affiliate Links. That means if you click on a link and purchase an item, we receive affiliate commission at no cost to you. All opinions remain our own. Pinky Promise!